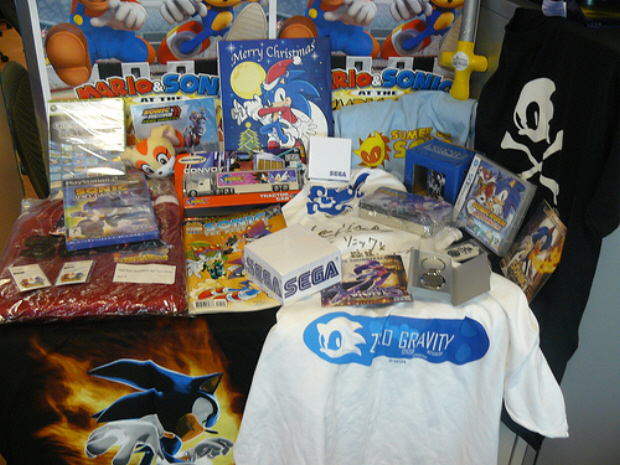 Sonic the Hedgehog is a ripe blue youngster at age 18! And to celebrate the Blue Blur’s transition into adulthood, Sega is giving away a metric TON of swag via Twitter and Facebook contests.

Read below for the full details on what you can win and how to enter the contests for what you see in the beautifully cluttered picture above.

In order to help those who don’t have lightning fast connections Sega will often specify that a specific response (the 5th, 8th, 15th, etc) will win the prize. They then will repeat the process until all the swag packs are taken.

All items are worldwide unless specified.

To be in with a chance of winning on Facebook, you need to become a fan of Sonic the Hedgehog on Facebook – http://www.facebook.com/sonic. From about 11am UK time, June 23rd Sega will announce which swag pack we are giving away and then ask for wall posts/comments on a topic of our choosing. The best comment in our opinion after approximately 30 mins will win the prize. They’ll continue until we run out of prizes.

Note: I am a bit late but they are still giving out a few prizes as I type this, so hurry up and enter!