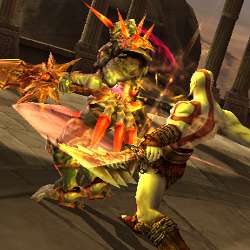 Soul Calibur: Broken Destiny is a handheld follow-up to the Soul Calibur 4 console game. It will feature arcade, versus and survival modes. It will also offer a single-player mode which will function as an enhanced tutorial mode.

God of War’s main character Kratos joins the epic tale of souls and swords, in order to replace the missing Star Wars guest characters that are absent from the Soul Calibur 4 roster.

Watch this trailer for their character unveilings: