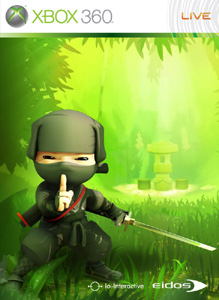 In Mini Ninjas you play as Hiro, a young trainee Ninja and the last person that would be expected to go and save the world. Yet that is exactly what happens… as you would expect from the world’s most unoriginal plotline.

When the Evil Samurai Warlord, with the help of an ancient magic, turns forest animals in to an army hell bent on world domination, Hiro must lead his small band of Ninjas on an exciting journey through a disintegrating world, to battle the magical hordes of twisted Samurai and eventually confront the Warlord in his Fortress of Doom.

The journey to the Fortress of Doom is long and dangerous adventure that will take Hiro and his Ninja friends through a big exciting world which varies greatly, from bamboo forests, to snowy mountains, with treacherous castle interiors and flooded valleys. They will be challenged like never before and need to use their ninja skills, potions, magic and to defeat evil. Prepare yourself for a Ninja adventure like you have never seen before!