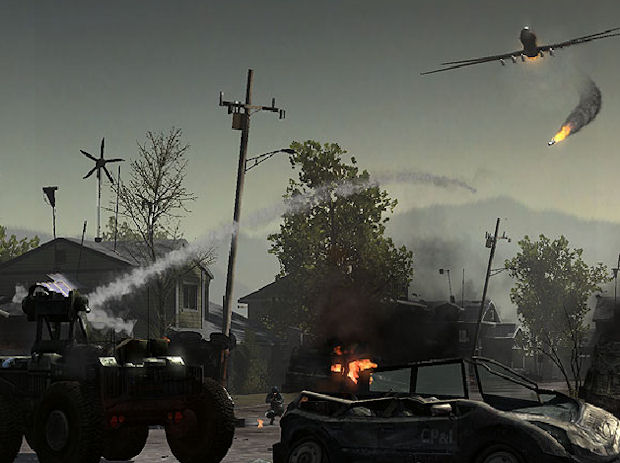 THQ recently announced their Homefront game, a new First Person Shooter (FPS) from internal developer Kaos Studios (of Frontlines: Fuel of War fame). Penned by John Milius (Apocalypse Now, Red Dawn), Homefront is set ten years after the economic collapse of the United States and follows the American Civilian Resistance as they fight to reclaim their homeland from an oppressive North Korean occupation. Featuring a personal, story-driven single player campaign and a full suite of multiplayer options, Homefront is scheduled for release on the Xbox 360, PlayStation 3 and Windows PC.

“Homefront isn’t about going to war on the other side of the world or battling aliens from another planet; it’s about fighting foreign invaders in your own backyard and defending your right to live,” said David Votypka, design director, Kaos Studios. “Homefront combines the unsettling notion of an occupied America with interactive, player-driven narratives to create a deeply engaging single and multiplayer experience.”

About Homefront:
The year is 2027. The world has suffered a decade-long energy crisis, and economies have crumbled. Reduced to a mere shadow of the super power it once was, the United States became the target of a North Korean takeover. American malls, suburbs and city streets are now battlegrounds as the civilian resistance fights for freedom. Featuring a compelling single player story crafted by John Milius (Apocalypse Now, Red Dawn), Homefront immerses gamers in an interactive and cinematic FPS experience where they will assume an infantry role or take command of a wide variety of aerial and ground vehicles. In addition to the single-player experience, Homefront will deliver a robust multiplayer experience. In a land stripped of freedom, the brave will fight for their home.

In case you were wondering where the game’s name came from. The dictionary’s meaning of “home front” is: The civilian sector of a nation at war when its armed forces are in combat abroad.