Splinter Cell: Conviction revamped and revealed for Xbox 360 and PC 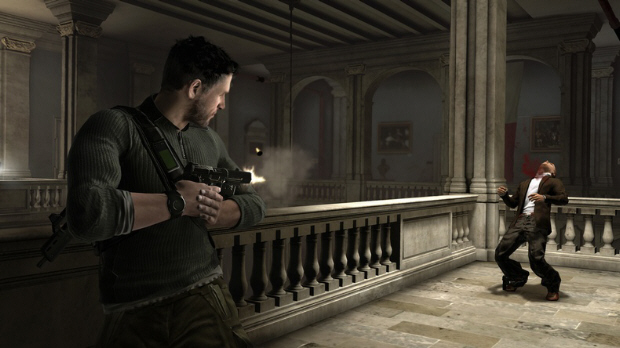 Splinter Cell: Conviction has come leaps and bounds since we last saw it, and it looks to really drive the gameplay into some new territory. As you will see in the videos below, the biggest new feature of the game is it’s emphasis on smooth and fast-paced action and shooting that compliments the stealth gameplay. Sam Fisher’s arsenal of moves has increased and includes some really cool new abilities like Mark and Execute, which allows you to quickly and with pointpiont accuracy take out your enemies. You’ll also see a new ability which shows a shadow of where Sam was last detected, and that spot is where enemies will focus on trying to find him (where they last saw you). He can also use a piece of a broken mirror to peer under doors as well as fling someone over a ledge while hanging from it.

The developers state that each environment in the game is built like a small sandbox, allowing players to move through them however they wish.

But the best, coolest and most impressive aspect of Splinter Cell: Conviction, in my humble opinion, is the way the narrative is told and the mission objectives displayed. These pieces of information are literally displayed on the environment as you make your way through the game; Rather than just being signs in the background or whatnot. They are literally projected or layered atop the area around you in what is a startling and very cool effect. Personally my two favorite games of E3 2009 so far were Alan Wake and Splinter Cell: Conviction, simply because I love the way the developers are focusing on new storytelling methods. With Alan Wake offering narration by the main character as you play and Splinter Cell: Conviction giving the story via environment overlay as you play. Both offer extremely cool new ways to present the story to the player. I hope we will see more developers embracing new ways to tell us stories.

Here is the CG intro for Splinter Cell: Conviction.

Here is the game being played at Microsoft’s E3 Press Conference.

And here is a final look at the game from Ubisoft’s E3 2009 Press Conference (although it contains a lot of the same scenes, it is different).