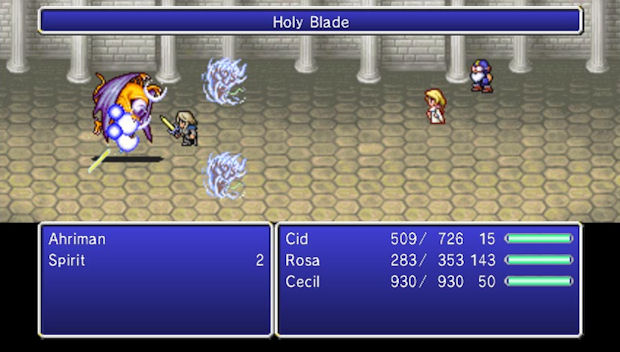 Nintendo downloads for the week: The After Years on WiiWare is the first true sequel to Final Fantasy IV is sure to get RPG fans’ blood pumping. Nintendo DSiWare users will find a challenging new puzzle game to help keep their minds spinning. A slick new poker title from the WiiWare service raises the stakes for virtual card sharps, while the Virtual Console debut of a classic Commodore 64 game puts players in pursuit of precious gems.

Where available, we’ve included videos of each of today’s games. Either for nostalgia’s sake or so you can see if any new game is to your taste.

Final Fantasy IV: The After Years
Publisher: Square Enix
Players: 1
ESRB Rating: E (Everyone) – Alcohol Reference, Mild Fantasy Violence
Price: 800 Wii Points = $8
Description: Final Fantasy IV: The After Years is the sequel to the hit RPG Final Fantasy IV. The story takes place many years after the original and centers on a young man named Ceodore, son of the paladin Cecil and the white mage Rosa, who, along with their loyal and steadfast friends, once saved the world from evil born of the second moon. Now, monsters are reappearing in a world that had finally attained peace. The second moon has returned anew. What tidings does this ominous harbinger bring? Familiar faces and new allies join the battle to save the Blue Planet once more.

Texas Hold’em Tournament
Publisher: Digital Leisure, Inc.
Players: 1-6
ESRB Rating: T (Teen) – Simulated Gambling
Price: 500 Wii Points = $5
Description: The deck is shuffled and the blinds are in – it’s your move. Call, raise or even bluff your way “all in” with Texas Hold’em Tournament. You’ll start off in the small Nevada gaming halls and work your way up to the Las Vegas Championship. Multi-round, no-limit hold’em game play ensures hours of serious poker action. Think you’re the best poker player out there? Using broadband Internet access and Nintendo Wi-Fi Connection, start climbing the worldwide rankings by winning online tournaments, and see how your poker skills stack up by viewing the online leaderboard. Texas Hold’em Tournament also lets you play multiplayer poker with up to five friends, and with full Mii™ character support, you can truly bring yourself to the table.

Boulder Dash
Original platform: Commodore 64
Publisher: Commodore Gaming
Players: 1-2
ESRB Rating: E (Everyone)
Price: 500 Wii Points = $5
Description: Originally released in 1984, Boulder Dash is one of the big computer-game classics. It is one of the very few computer games ever to be ported from home computers to arcades, not the other way around. The hero of the game is the brave prospector Rockford. He must dig through caves to collect diamonds while avoiding various types of dangerous creatures and obstacles such as falling rocks. He is in constant danger of being crushed or trapped by an avalanche or killed by an underground explosion. Strategy and planning are the keys to mastering Boulder Dash. Once enough jewels have been collected, the door to the mysterious escape tunnel is revealed and Rockford can explore another cave.

This week’s new DSiWare game is:

Mighty Flip Champs!
Publisher: WayForward Technologies
Players: 1
ESRB Rating: E (Everyone) – Mild Suggestive Themes
Price: 800 Nintendo DSi Points = $8
Description: Are you ready to become a Mighty Flip Champ? Take control of Alta and page-flip through a series of action-packed mazes. The touch screen reflects a preview of the next chamber and shows Alta’s projected destination within it. When it’s time to flip, use Alta’s Magical Warp Wand to replace her world with the next one. Will she land safely on solid ground or be crushed under it? By cycling endlessly through room after brain-busting room, you’ll match wits with some of the most devious traps in puzzle/platforming history.