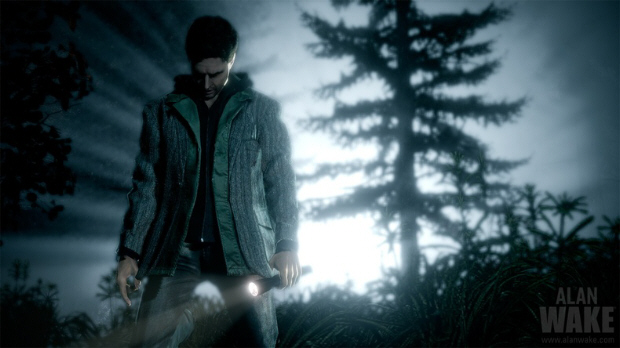 What was shown of the upcoming game was impressive in many respects and definitely piqued my interest as a title to look out for. Alan Wake is expected to arrive on Xbox 360 in Spring 2010.

In the game players take control of an author (the titular Alan Wake) who’s wife has gone missing while they were spending a peaceful time in the small town of Bright Falls in order to get away and hopefully break through Alan’s writer’s block. But when Alice goes missing Alan’s world is transformed into one of pure terror.

The coolest aspect of the game in my personal opinion is the way the environment and the story are incorporated into the gameplay. As you play the game Alan will narrate which is a really cool feature that makes the story pop-out and feel dynamic. Additionally, as haunting, evil creatures appear to attack Alan, the world around him will morph, change and grow dark which is a fantastic effect that highlights the shadow and darkness around Alan and makes the world feel “alive”. In this dark world light is your best weapon and it is used in cool ways in the game’s shooting scenes as Alan uses the flashlight to damage enemies and then shoots them to put the final nail in the coffin.

Give the game a look in this gameplay video.