Resident Evil: Degeneration videogame based on animated movie out now on iPhone and iPod Touch 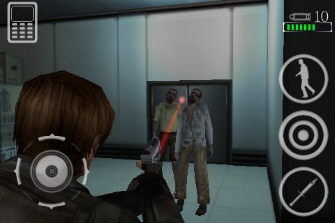 Resident Evil: Degeneration has released for iPhones and iPod Touches everywhere via the the iTunes store at a price of $7.

The game is based on the horribly reviewed direct-to-DVD CG film of the same name and plays out similar to a cross between Resident Evil 4 and a Silent Hill game.

Like RE4, the game is a third-person shooter with an over-the-shoulder camera for shooting zombies that come shuffling toward you. You control the game via an on-screen stick and on-screen buttons.

The 3D graphics of a modern Resident Evil game are there, albeit in much lesser quality form (as you’d expect on a mobile platform). However the lack of sound effects and diminished music actually reminds me a lot more of a Silent Hill title than a Resident Evil one. Which is not a bad thing. I also noticed in the video below that there is a lack of blood when shooting zombies, so the game lacks some of the expected effects of its big-console brothers.

Key Features of Resident Evil: Generation for iPhone include:

Download Resident Evil: Degeneration for iPhone if you’re looking for a solid third-person shooting experience on your phone. And give the game a look in this gameplay video.