THQ has announced All Star Cheer Squad 2 exclusively for Wii. It’s scheduled for release this Fall.

The game once again will have players traveling to 14 exotic locations for various cheer competitions that have been choreographed by Tony G, best known for his work on the Bring It On movies. He served as a cheering consultant for the game.

No longer a newbie, players will start out as the captain of the Tiger Squad, leading the team to victory by utilizing an all-new diverse move set that includes real-world aerial stunts, tumbling, formation changes and advanced moves on the Wii Balance Board accessory.

Even more exciting, moves can be executed by using two Wii Remotes, allowing for greater mobility. Players will select their squad members (which now include male cheerleaders) and then choose from more customization options including new makeup, hairstyle and uniforms.

Meanwhile We Cheer 2 also comes to Wii in Fall 2009 as well from Bandai Namco.

series raises the bar with more options than ever before: an all new licensed soundtrack of chart-topping music, challenging new dance moves, new stages and gameplay modes, and limitless customization options for a huge roster of both female and male characters. Get ready to shake those pom-poms and show that team spirit! 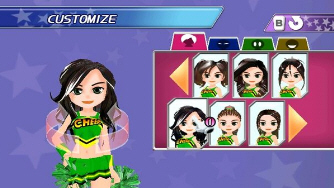 We Cheer 2 heightens the realistic, competitive cheerleading experience by immersing players in a nationwide cheerleading championship setting. Utilizing the Wii Remotes as virtual pom-poms, players follow on-screen prompts for choreographed routines that utilize a full range of arm and body movements. Players can choose to play with two Wii Remotes (one for each hand) or use just one in either the right or left hand. We Cheer 2 is the only cheerleading video game to offer a hit soundtrack of licensed music and features a brand new lineup of 30 rockin’ songs that will get players energized and ready to cheer. The game offers more than twice the amount of playable characters than the original and now also offers the choice for boys as well as girls. Players will also have access to limitless customization for both their character and their entire squad with an increased range of options for outfits, accessories, facial features and more. 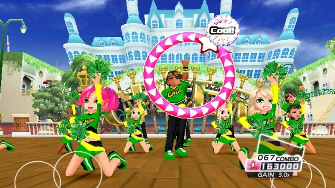 We Cheer 2 offers cooperative and competitive multiplayer modes with more than 20 stages and supports up to four players for exciting squad group action. With various difficulty options, the game caters to players of all skill levels from novice cheerleaders to varsity level movers and shakers. Players can practice and perfect their moves in a tutorial mode complete with a set of cheer lessons that provide an overview of each of the various motions in the routines. Performing well in the single player campaign and trainer modes earns points that can be used to unlock new stages, moves, songs and character customization options. With its simple yet addictive gameplay, players will lose themselves in the music and moves as they perfect the routines and earn top spot as captain of the squad.