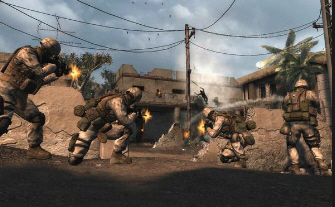 Konami has officially confirmed that they WILL NOT be publishing Atomic Game’s Iraq War-based videogame “Six Days in Fallujah”, which was to be based on real accounts of the intense battles with insurgents in Fallujah, Iraq that took place in 2004.

The reason they dropped the title was apparently due to all the controversy that the game has attracted in the mainstream media and specifically “negative responses in the United States.”

To quote a Konami PR representative:
“After seeing the reaction to the videogame in the United States and hearing opinions sent through phone calls and e-mail, we decided several days ago not to sell it. We had intended to convey the reality of the battles to players so that they could feel what it was like to be there.”

The game was set for release in 2010 or later. Now it looks like the game may not see the light of day at all unless the developers can find another publisher.

Peter Tamte, the President of Atomic Games issued this statement about Konami dropping the title: “We were informed that Konami had decided to pull out of Six Days in Fallujah. This caught us by surprise. Development of the game had been progressing very well and on schedule. We would very much like the opportunity to complete the game.”

Here is an interview with the developers discussing the game and showing it off:

Personally I was torn on this game. On the one hand I found the premise to be interesting since it was to be based on real-life accounts from soldiers who lived it. It was to go so far as to use actual journal entries written by soldiers and real-life photographs in its storyline. Which sounds really interesting to me.

On the other hand, I definitely sympathize with people who think it is too soon to have a videogame based on an ongoing war. This particularly hits home for me as one of my friend’s boyfriends is headed over to Iraq next week and I know other people who have relatives involved in the conflict. I also am weary of any media portrayal of the war which is generally one-sided and politicized, in which case I would not be interested in the game.

Either way we’ll keep you posted on the game’s status.