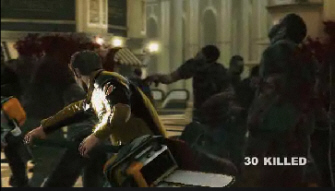 The trailer reveals some bits of the game’s story, a look at the game’s main character Chuck Greene and,as you would expect (and want) from a Dead Rising 2 trailer, a look at some of the weapons you will find and use to bash zombies. And we mean bash LITERALLY (natch). There is also a running kill count in the bottom right-hand corner, as you can see in the pic above.