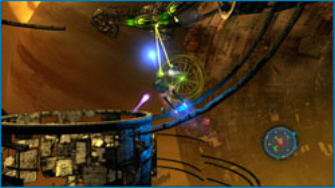 Star Trek: D-A-C has officially been announced for release on Xbox Live Arcade, PlayStation Network and PC this month. The game is inspired by the upcoming Motion Picture which hits theaters on May 8th.

Star Trek D-A-C is a fast-paced top-down shooter that has players taking on the role of the captain and engaging in intense online multiplayer or co-op battles. Players will get to pilot a number of ships and pitch battles between Starfleet and the Romulan Empire and the multiplayer supports up to 12 players. There are three modes: single player, online multiplayer and online co-op. With three game types for each mode: Team Deathmatch, Assault and Conquest. There are also three ship types for each faction, including new ships featured in the film.

Each ship – the powerful Flagship, the nimble Fighter and the devastating Bomber – offers its own unique capabilities for players to master and manipulate as they fight for victory. In addition to featuring the new U.S.S. Enterprise, Star Trek: D-A-C incorporates music and signature sounds taken directly from the new “Star Trek” film.

“The upcoming ‘Star Trek’ film has ignited interest among a new generation of fans as well as longtime fans of the original,” said Tom Lesinski, President Paramount Pictures Digital Entertainment. “With that same goal in mind, Star Trek: D-A-C was designed to appeal to ‘Star Trek’ fans and gamers alike. The pick up and play arcade-style game play lets fans take the command and boldly go!”