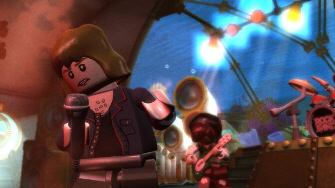 Lego Rock Band seeks to merge the world’s of Lego with the best-selling Rock Band franchise. And will target a new, younger audience of kids, tweens and teens.

In Lego Rock Band, players will become rockstars as they embark on a journey to stardom that the whole family can enjoy as they work their way through local venues, stadiums and fantasy locations on Earth and beyond, that mimic the imaginative settings that the Lego world offers.

Additionally, the game will continue the Lego “build-and-play” gaming experience by allowing players to create their own Lego Rock Band style as they customize their Minifigure avatars as well as their band and its entourage (which includes roadies, managers and crew). The game supports Rock Band instruments as well as other music game controllers.

Ultimately Lego Rock Band combines the multiplayer Rock Band experience with the fun, humor and customization of the Lego universe to offer a younger group of game players a new take on chart-topping songs and classic favorites suitable for the younger audience.

“LEGO Rock Band combines two compelling properties and creates an experience that family members of all ages will enjoy playing together as a group,” said Tom Stone, Managing Director, TT Games. “Harmonix and MTV Games are the world experts in music gameplay, and we’re genuinely thrilled to bring the unique and humor-filled LEGO experience to their Rock Band universe.”