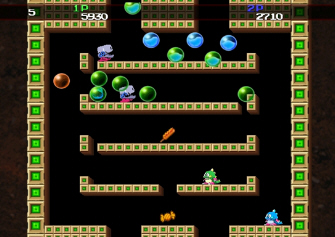 Square Enix has announced that they will be releasing two updated Taito classics onto WiiWare with Bubble Bobble Plus and Rainbow Islands: Towering Adventure set for release this May.

Bubble Bobble is an arcade classic that was originally released in 1986 and become a hit all around the world. Bubble Bobble Plus updates the classic with a four-player multiplayer mode and a global leaderboards. The game will also offer 400 challenging maps (200 stages with two difficulty settings equaling 400 stages) and mark the return of all the memorable characters you know and love along with all new characters.

In Japan Square also released two Expert Map Packs for 200 Wii Points each that add 100 additional stages (together) and a single additional boss per pack.

Square will also be updating their other arcade classic Rainbow Islands (released one year after Bubble Bobble in 1987) with a new game called Rainbow Islands: Towering Adventure. This game will feature the return of Bub and Bob in their human form to take on “a new adventure with surprising new skills.”