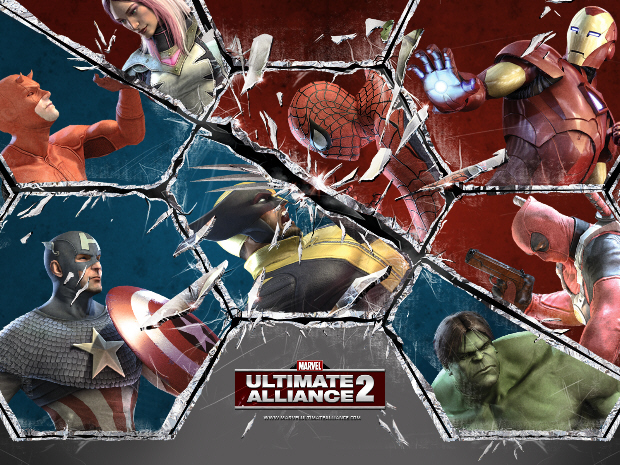 30 Playable Marvel Ultimate Alliance 2: Fusion characters have been confirmed for the roster. The action-RPG game releases in America on September 15th, 2009. It has been announced for Wii, DS, Xbox 360, PlayStation 3, PlayStation 2, and PlayStation Portable. No PC version apparently.

Certain console versions will have exclusive characters, and systems that allow for DLC will receive additional characters for download! This was confirmed* by the president of developer Vicarious Vision, Guha Bala. If you want to unlock all hero characters, then during gameplay press: Up, Up, Down, Down, Left, Left, Left, Start.

The sequel to 2006’s Marvel: Ultimate Alliance, Marvel Ultimate Alliance 2: Fusion will feature both new and returning characters of both the hero and villain variety all from the Marvel Universe. A new feature that allows characters to combine with other characters, thus the “Fusion” subtitle. The game will include an updated power combo system, improved camera and controls, Havok physics technology, a new 3D sound system and improved lip syncing among other new features.

Other characters who may or may not be playable are:
* Stan Lee — Like his movie cameos. To quote him: “It’s such a kick to see characters that I’ve helped create come to life in the game and now I’m a part of the Marvel videogame universe!”
* The Vision — Originally rumored back in 2008, may be left out.

Other characters who appear in the game (mostly as opponents):

What other playable characters would you like to see in Marvel Ultimate Alliance 2?

Watch a story trailer for the game here:

As new characters are revealed we will update this list. — Last updated September 19th to add cheat codes and ways to unlock all playable characters.