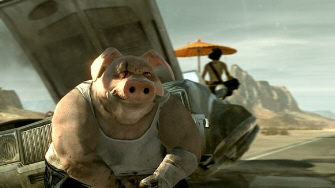 Beyond Good & Evil 2 Wii is not being denied says designer Michel Ancel in a recent interview. However the game is in pre-production with the intention of hitting Xbox 360 and PS3.

But Ancel didn’t rule out the Wii entirely. To quote:

“We are not sure what platforms. We are on a next-gen format but we can’t say if it will be one or two. technical ambitions don’t eliminate adaptations or particular versions concerning Wii.”

He also made some other statements in a recent video interview with a French gaming web-site. He noted that the game will see the return of “lots” of characters from the first Beyond Good & Evil and says that the gameplay “will be different this time around” although no exact details were given on HOW different.

He also spoke of his disappointment with the PS2 hardware for the original game (saying the PS2 didn’t live up to expectations) and finally, stated that Beyond Good & Evil 2 will be bigger, more immersive and include more investigations.

And that’s all she wrote. For now.