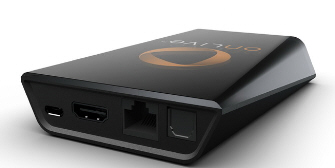 OnLive, Inc. revealed their all new OnLive MicroConsole and “The OnLive Game Service” at GDC 2009.

Created after seven years of stealth research with Rearden Labs, OnLive is set to tip the gaming world on it’s head with an all-new subscription based PC plug-in and/or mini-console device that allows gamers to stream high-end PC videogames to their TV or computer. It will launch this Winter 2009.

“OnLive is the most powerful game system in the world. No high-end hardware, no upgrades, no endless downloads, no discs, no recalls, no obsolescence,” said Steve Perlman, Founder and CEO of OnLive. “With OnLive, your video game experience is always state-of-the-art.”

There are two options available. The first is a simple PC or Mac web-browser plug-in. Simply install this baby and you will be able to play high-end PC games like Crysis on your Windows XP low-grade computer that you bought way back in 2002.

The other option is via a slick little “Micro-Console” (as they’ve dubbed it), a gaming system that is about the size of a deck of cards and who’s hardware includes nothing other than two USB connectors, a network jack, and some AV outs. Connect the Micro-Console to any TV (HD or not), hook it up to your Internet connection and you are good to go. You can then stream any of the available games and play them in the highest resolution (and if your PC, TV or Internet connection isn’t fast enough, then it’ll revert to an appropriate Standard Definition for smooth play). 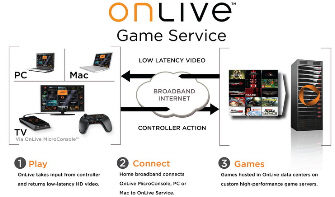 How is all this possible you ask? Because the magic happens ELSEWHERE. Sitting at the OnLive Inc. offices/storagerooms/HQ/underground science facility are computers that are stocked with the highest end computers known to man (or so they say). They are even upgraded every six months with the newest hardware. This means that you, the user, has to do nothing. Simply hook up the MicroConsole or download the plug-in and play. You’ll see what those high-end computers see, hampered only by the speed of your Internet connection (A 1.5Mbps connection will work for SD, and a 5Mbps is required for HD. ).

Here’s the official breakdown:
* Connect to OnLive with your TV, PC or Mac and start a game
* Your game runs in a state-of-the-art OnLive game server center
* OnLive connects you to game servers through the Internet, instantly sending your controller actions upstream and the results back downstream at blinding fast speeds
* Enjoy ultra high-performance gameplay on your TV or entry-level PC or Mac

The system itself is subscription-based (prices have yet to be announced, but they say pricing will be significantly lower than every console on the market) and will come with it’s own unique wireless controller but will also support any PC USB controller INCLUDING the Xbox 360 controller. Up to four OnLive Controllers can be wirelessly hooked up to the system at once. Or if you are on PC you can simply play with a mouse and keyboard. 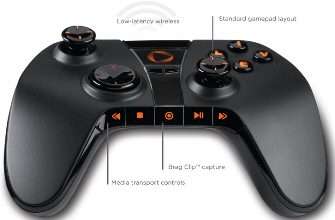 But it’s all about the games, and so far they have some pretty good company. Already signed on to port over games are: Electronic Arts, Ubisoft, Take-Two Interactive Software, Warner Bros. Interactive Entertainment, THQ Inc., Epic Games, Eidos, Atari Interactive and Codemasters. At GDC they demonstrated 16 different titles including Crysis, Burnout Paradise, Mirrors Edge and Prince of Persia among others. 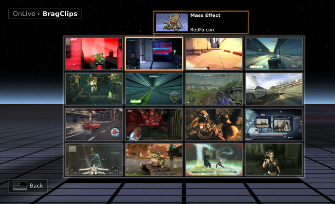 Additionally, the game will include some pretty cool unique features. By hitting a “Brag Button” on the controller you can record the last 15 seconds of gameplay for those times when you pull of something cool and want to record it. You can then upload it to your unique player profile and share it with your friends on your friends list or broadcast it to the world.

Spectating is a big part of OnLive and you will be able to watch anyone on the service playing any game for as long as you want. What’s more, players will be able to see how many people are watching them play, which gives the service a whole new kind of competitive environment and the players playing a entirely different form of bragging right.

Overall the system is very ambitious so it will be really interesting to see how things pan out. I am a bit skeptical myself but things certain sound good.