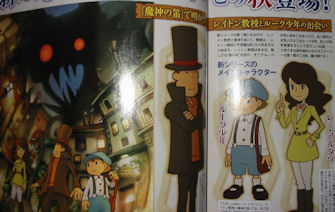 Developer Level 5 has confirmed that Professor Layton (4) and the Devil’s Flute will be released in Japan sometime in fall 2009. The game is said to be a second trilogy in the Nintendo DS puzzle-adventure series, and takes place three years before Professor Layton and the Curious Village, before Layton met Luke. But don’t worry, Luke still plays an important role. And the not-yet-duo are joined by Remi Altava, a new female colleague of Layton’s, who also plays an important role. All 3 characters can be seen in the first scan above.

Talking to Japanese gaming magazine Famitsu, Level-5 boss Akihiro Hino said: “The series wrapped up its [first] trilogy with Professor Layton and the Last Time Travel [in Japan], so there was a bit of resistance to making yet another new title. However, we received word from a lot of gamers during development asking if this was really the end, and that was all the inspiration we needed to create a new trilogy, a ‘second season’ of Layton.

With this trilogy, we’ve got puzzles and tricks that go across all three games. I think each individual game is going to take a lot more time to complete than before. We’re challenging ourselves here because we don’t want people to think it’s the same thing over again,” translates 1UP.

Devil Flute’s story takes place in a mysterious fog-enshrouded town, that’s home to a legend of a great giant who menaces the countryside whenever a certain flute is played. The game is connected to the Professor Layton and the Immortal Songstress anime movie that’s coming out in Japan in January 2010, with the movie being a continuation of the story in Devil Flute’s.

Meanwhile, Nintendo has only translated the very first game into English for Americans and Europeans, who are eagerly awaiting the rest of the first trilogy. So far there’s only been one hint at Professor Layton 2 being localized for America.