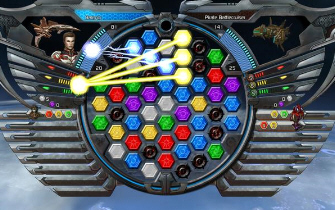 Puzzle Quest: Galactrix is the sequel to the award-winning puzzle RPG Puzzle Quest: Challenge of the Warlords and will be released for Xbox 360 on Xbox Live Arcade and for PS3 via the PlayStation Network soon while the PC and DS versions of the game are now available.

Updates to this game over the original include hexagonally shaped puzzle pieces and gravity that will effect how the pieces fall. If you’re in orbit around a planet tiles will always fall downwards but if the battle is taking place in space new tiles will come from the direction of your last move. You will also travel to various planets, other star systems and across the entire galaxy in this new game which will also include a diplomacy system, a commodity system and the ability to collect, customize and build your own ship.

Here is the “epic” launch trailer for Puzzle Quest: Galactrix.