What is Noby Noby Boy exactly? Creator attempts to describe the game 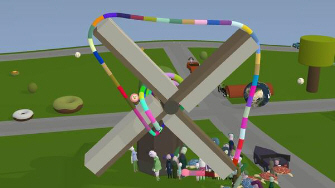 Noby Noby Boy is the latest creation of Keita Takahashi who is the creator of Katamari Damacy which releases exclusively on the PlayStation Network tomorrow, Thursday February 19th.

Like his previous game in which you had to roll around and collect things to grow into a bigger “ball of stuff”, Noby Noby Boy is a very strange game that is almost indescribable. How can a game be indescribable? Well, I think when the developer can’t even fully explain his game, that is when you know a game is truly hard to describe. But that’s the point, according to Takahashi:

“Basically players can control and stretch Boy, the main character of the game. As players stretch Boy, the lengths to which he grows are uploaded to a persistent character known as Girl, who grows at the same rate as the combined length of all the players in the world. Girl starts at Earth and expands around the solar system. When Girl reaches a new milestone in the solar system, new areas are unlocked as playable stages for everyone around the world.

Well, that’s the best that I can do to explain the game, but I know people will still go, “Hmm…”

“How come it’s hard to explain, you ask? It’s because I wanted to make a game that cannot be expressed by words in the first place. By making an undefined and ambitious game, I want the player’s reaction to be something like, “I don’t know why, but it’s somehow interesting. I can’t stop playing.” In that way, I would feel I have succeeded at creating what I wanted, that is, creating something that’s not easily describable. Anyway, it’s been a fun experience working on Noby Noby Boy.”