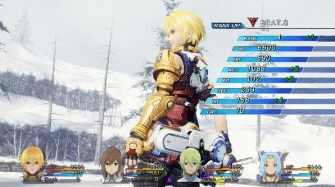 Star Ocean 4: The Last Hope is getting set to launch exclusively on Xbox 360 with a release date of February 23rd in America and April 24th in Europe.

The game is the fourth entry in the Star Ocean series and the follow-up to Star Ocean: Till the End of Time which was released for the PlayStation 2 way back in 2004, allowing this newest game to have a five-year development cycle.

The game was developed using an improved version of the Infinite Undiscovery engine with vast improvements in graphical quality and expressions of light.

The game uses the same battle system as before but this time you can have up to four-party members at once. The game is also more science fiction-focused than previous games in the series and allows players to pilot their own ship that will allow them to land on at least five planets as well as other locations.

The game’s storyline takes place before the original Star Ocean during the aftermath of World War III.

Here is a Japanese trailer looking at the game’s many characters.

Key features of Star Ocean: The Last Hope include:

* Gameplay updates including: the navigable spaceship Calnus, and combat enhancements Rush Mode, Sight In/Sight Out, and “BEAT” system.
* Classic sci-fi/fantasy RPG action set across the vastness of space that recounts the origins of the Star Ocean universe.
* Beautifully rendered combat expanding on the franchise’s famous real-time battle system and only possible on Xbox 360.
* Breathtaking CG cinematics by Visual Works, the studio whose previous work includes cutscenes for the Final Fantasy RPG series.
* An expansive cast of playable characters, each with his/her own personality, signature moves and weapons.

In addition, here are some more videos of the game showing gameplay footage:


Last but not least, here’s a Japanese commercial for Star Ocean 4: The Last Hope.