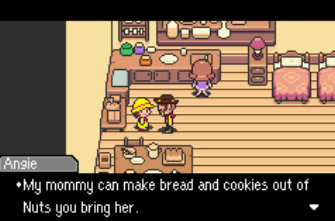 One of the most outrageous things Nintendo has ever done in their history is refuse to re-release the extremely popular EarthBound games in the West. Known as Mother in Japan, the series is made up of the original Mother for NES (a game that was never released outside Japan even though a port of the game was finished, English translation and all), Mother 2 (released in America for SNES as EarthBound) and Mother 3 (released on the Game Boy Advance ONLY in Japan).

Nintendo even packaged together the first two games for their “Mother I&II” collection for GBA . . . and DIDN’T release it outside Japan.

It got so bad that EarthBound fans saw it fit to translate Mother 3 themselves and release it as a ROM update to the original Japanese ROM on the Internets. Something you can find out more about at Starmen.net.

The sad thing is that the hopes of fans have been crushed time and again by broken promises . . . and yet we still hold out hope.

That hope has grown by a few experience points (chuckle chuckle) once again with recent news from Joystiq that Nintendo second-party developer Brownie Brown (Magical Starsign, Sword of Mana, Blue Dragon Plus) is interested in doing a port of Mother 3 for the DS. One sticking issue that I’m sure has made Nintendo hesitate in the past is what to call the game’s since everyone outside Japan knows it as EarthBound and not Mother. But who cares! DO IT NINTENDO DO IT!

Either way, Brownie Brown President Shinichi Kameoka told Siliconera that they would love to release the game for DS, all they need is the green-light from Nintendo themselves. To quote:

“If we were asked to make a DS version of Mother 3, then we would. We would definitely like for fans abroad to play the game.”