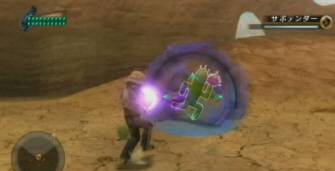 The thought-to-be-cancelled Final Fantasy Crystal Chronicles: The Crystal Bearers for Wii has resurfaced in an all-new trailer that shows lots of gameplay footage.

But it looks as if the game is still in development and WILL see the light of day after all. Hooray!

The new trailer for the game is impressive and interesting in more ways than one, both visually and musically. Not only do you get to see some telekinetic powers in action including hurling a Cactuar like it’s a spiny-spinning Sonic the Hedgehog-style wheel (which is worth the price of admission if you ask me) and an adventure that seems to be much grander in scope than previous Crystal Chronicles games with a proper storyline and lots of characters. The game seems to be a single-player adventure that looks similar in style to Final Fantasy XII but with real-time battles where you can fling enemies across the screen. Very cool indeed.

Hopefully the game will be released without too long of a wait. And without further ado, here is the new trailer thanks to Dash of youtube and Joystiq.