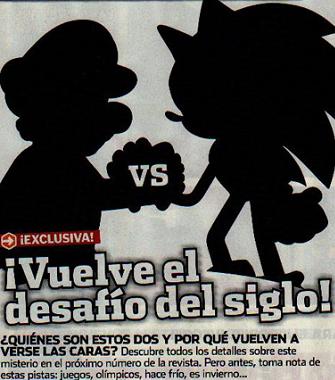 Spanish gaming magazine Nintendo Accion has hinted at Mario & Sonic 2 being in development at Sega, and coming to Nintendo Wii, by showing silhouettes of the two former-rivals-now-buddies with accompanying text suggesting a second sports party game will be revealed exclusively in their next issue.

To quote the text: “Who are these two and why do they come to see each other? Find out all the details on the mystery game in the next magazine. But before that, here are some clues: games, Olympics, it’s cold, it’s winter…” Which is clearly a hint at a Winter Olympics sequel to Mario & Sonic at the Olympic Games (Wii, DS) which has sold over 5 million copies worldwide!

Sega has responded with the usual “no comment” on rumors.

Translation from Spanish by Seganerds.