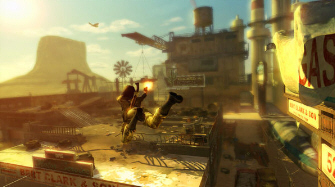 Developer A2M and publisher Sierra Entertainment has released some all new screenshots from their upcoming action game WET, which is in development for the Xbox 360 and the PlayStation 3.

The game stars a female character named Rubi and seems similar to a Prince of Persia or Tomb Raider style action game where the protagonist can run along walls and do various acrobatic moves. She also has guns and a sword similar to Dante in the Devil May Cry games.

The game hasn’t been seen in a while and fell into development limbo when Activision Blizzard dropped it. Although thankfully the game is still scheduled to come out in 2009 and A2M has said that the game is so far long in development that they definitely will not be canceling the game.

Either way, here’s a brand-new batch of cool WET screenshots where you can see the game in action.