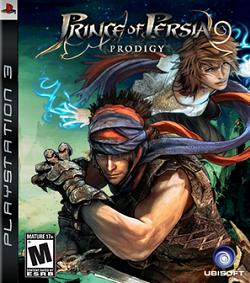 Obvious spoilers aside, their intentions have been confirmed by a cliff-hanger ending paving the way for another Xbox 360, PS3 & PC game in the series. Here’s what happens: After the Prince sees that Elika’s sealing away of the evil Ahriman means she must transfer her own life into the tree, which results in her dying again. He sees only one course of action remaining and cuts down the tree of life, just like Elika’s father the King did, in order to bring her back to life. Then a cutscene shows the Prince carrying Elika away from the crumbling Temple out into the desert, while behind them, the Temple is destroyed and the surrounding land corrupted as Ahriman is fully released. At the same time an achievement is unlocked titled “To Be Continued…” which is described as, and I quote: “Congratulations, the game is complete… the story has only just begun…”

You can watch a video recording of the ending below (it’s the only ending, there are no alternatives) and judge for yourself how likely another Prince of Persia game is.

As you know, back in February 2009, Prince of Persia received downloadable content in the shape of an “Epilogue”. The video below will show that at the end Elika says bye to the Prince. This is the conversation they have that further hints at a sequel coming up.
Prince: “We’re through… I think we’re clear.”
Elika: “I couldn’t heal him. Ahriman was too strong…”
Prince: “Just because he’s growing stronger doesn’t mean – ”
Elika: ” – If I couldn’t stop him now, how can I ever hope to?! Ahriman is free and he will only grow more powerful…”
Prince: “We have to get out of here. If we cross the desert, there’s a city two, three days from here. Or, there’s a port… it’s further, but we could cross the sea, find somewhere further away.”
Elika: “Go where you will. May Ormazd watch over you.”
Prince: “Elika? You can’t do this alone!”
Elika: “I know… that is why I must find my people.” *Elika flies away*
Prince: “Elika!”
Narrator (Ahriman?): “The wheel turns… You cannot stand in its way… The light is dimming… It’s dimming…”

Thanks to Zarzour for recording the video and image courtesy of Vgboxart.