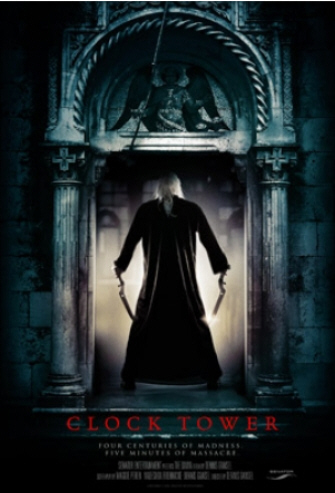 A movie is coming for Human Entertainment & Sunsoft’s classic “Clock Tower” survival horror games, which are now owned by Capcom. The latest game was the PS2’s Clock Tower 3 which was released back in 2003. The first game was released on the SNES, PC, PS1 and WonderSwan.

The games all share a theme of having main characters who are mostly defenseless as they are stalked by hideous monsters (including the popular Scissorman character, see his poster below) that they must hide from by using their surroundings to escape. The games also involved solving puzzles. But unlike other survival horror games you were limited in your ability to fight back which is the opposite of most other survival horror titles where the main characters can use weapons.

While the Clock Tower franchise has it’s own cult-following, the series never reached the popularity of other survival horror titles like Capcom’s own Resident Evil or Konami’s Silent Hill series.

But naturally, the franchise would seem to lend itself well to a movie, and that’s exactly what the director of the new film must be thinking. And not only that, but it’s likely that most people who see the upcoming horror film (which stars Brittany Snow) will not even realize that it is based on a video game.

Give a look at all the movie posters for the Clock Tower film above and below. Thanks to Filmz for the posters.

The movie is being released domestically by Sony Pictures Worldwide Acquisitions Group and will be released in 2009.