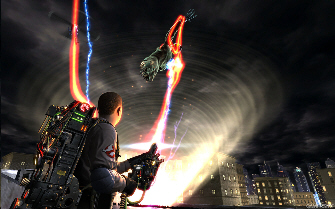 A new Ghostbusters: The Video Game trailer along with new screenshots has been released by Atari, who will publish the game on six systems (Wii, Xbox 360, PS3, PS2, PC and DS) in 2009. Note that the Wii and PS2 version will feature more cartoony looking graphics and characters due to the lack of HD graphics.

Developed by Terminal Reality, who worked closely with Sony Pictures Consumer Products, Inc., the game will be released to coincide with the 25th anniversary celebration of the original film’s theatrical release with a completely new story that re-unites the original cast members from the film (complete with their voice acting and in-game likeness) in a sequel (Ghostbusters 3, if you will) that seeks to recapture the unique blend of humor, fright and action that established Ghostbusters as one of the most popular and recognizable pop culture sensations in history.

Here is an all-new trailer for the game.

Ghostbusters: The Video Game is penned by the original writers of Ghostbusters, Harold Ramis and Dan Aykroyd and re-unites the original film’s cast, for the first time in 20 years, in Bill Murray, Dan Aykroyd, Harold Ramis and Ernie Hudson with a storyline that takes place two years after the Ghostbuster II film. The game even features fan favorites such as William Atherton (Walter Peck), Annie Potts (Janine Melnitz) and Brian Doyle-Muray (Mayor Jock Mulligan).

Sony will also be releasing the two movies on Blu-ray disc for the first time in celebration of it’s anniversary.