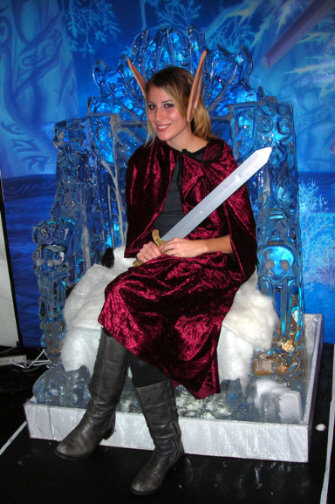 This morning saw the official release of World of Warcraft: Wrath of the Lich King to stores all across the United States and the world, as the latest WoW expansion was finally released to the public. And yes, there were cosplayers aplenty, as well as a female Lich King (or Lich Queen? View above) there to take in the festivities.

Blizzard CEO Mike Morhaime has said that players are coming back to World of Warcraft from MMO competitors Warhammer Online and Age of Conan. Something he saw even before the release of Lich King, no doubt in anticipation of it.

This news supports claims made by Blizzard’s COO, Paul Sams, who told GamesIndustry.biz that an increasing number of subscribers were returning to World of Warcraft from Warhammer Online, however it falls short of his given estimate of “well over half”.

What I’m interested in is whether or not Lich King will outsell World of Warcraft: The Burning Crusade which sold an incredible 2.4 million copies in it’s first week on store shelves, which had ballooned to 3.5 million units sold in it’s first month! Making it THE fastest selling PC game of all time! Will that be topped by Wrath of the Lich King? We’ll have to wait and see.

– Thanks to GameSpot for the picture