Home » News » PS3 News » Watchmen: The End Is Nigh is a videogame prequel to the comic book and movie

Watchmen: The End Is Nigh is a videogame prequel to the comic book and movie 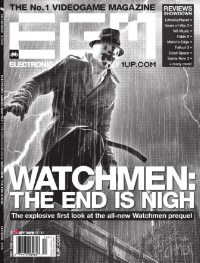 Watchmen: The End of Nigh is a videogame prequel to the comic books (as previously announced) and the upcoming Watchmen movie (which hits theaters in March of 2009) and is being developed by Deadline Games.

They worked in conjunction with Zack Snyder (who directed the movie), the original Watchmen illustrator Dave Gibbons, and veteran comics author (and Alan Moor’e original mentor on the Watchmen series), Lein Wein, who co-scripted Watchmen: The End of Nigh with Peter Aperlo and Zack Snyder.

EGM will have the exclusive scoop in this month’s issue which will blow the doors open on the game. Although 1-Up also revealed a few more details on the Watchmen prequel, including the fact that it will be an episodic game (published by Warner Bros. Interactive Entertainment) and downloadable.

The game will naturally flesh out many of the brief flashbacks hinted at in the graphic novel and will help fill in blanks for the upcoming film when they hit Xbox Live Arcade and PlayStation network next year.