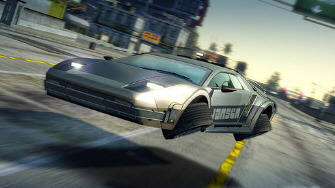 And “legendary” is indeed the best word to describe the first of four cars that Criterion Games’ Jeremy Chubb, producer for Burnout Paradise, revealed on the official PlayStation Blog.

As you can see in the picture above, Burnout Paradise will be getting the DeLorean clone car that they’ve dubbed the Jansen 88 Special, based on the fan-favorite Jansen P12 but with some VERY interesting modifications . . . IT HOVERS!!!!!!!!! 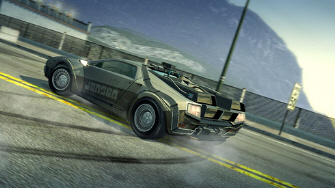 In their own words: “This classic 1980’s styled silver sports car is based on the fan-favorite Jansen P12, but we’ve made a few interesting modifications. Fill the gauge and hit boost to trigger burning flame trails from your back wheels. The 88 Special’s fast, maneuverable and great in the air. In fact, if you want to take off, this is just the car for you. Hit L3 to switch to hover mode – the wheels retract and the car takes off and hovers through Paradise City at head height. Seriously. It hovers.”

The Jansen 88 Special is the first of four cars available in the Legendary Cars Pack. The other four are the Cavalry Bootlegger, Manhattan Spirit and the GT Nighthawk and will be revealed later (including on Crash TV, they’re video podcast). These cars will be available for purchase either as a group or individually in February of 2009, as only the beginning of a wealth of new downloadable content that will be coming for the game next year, as Criterion continues to support the game.

And like the previous updates, including the Burnout Paradise Cagney pack and the Burnout Paradise Bike Pack released before, the Legendary Cars Pack will definitely be available for all versions of the game, including the Xbox 360 version, PS3 version and the upcoming PC version, which is scheduled for release in February of 2009, same month as the Legendary Cars Pack.