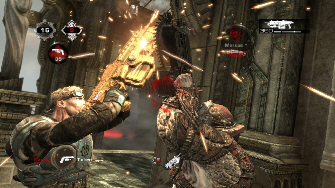 This Gears of War 2 guide will show you all available codes, cheats and help with unlocking modes, maps & skins, and get achievement points of the Xbox 360-exclusive third-person shooter game. Time to show those Locust who’s boss!

Let’s start with unlocking an additional difficulty setting for the main campaign: when you’ve finished the game once on any difficulty level, you unlock the Insane difficulty mode.

Did you know your copy of Gears of War 2 comes with a code for the free Flashback Map Pack? Yes, it does. Check on the inside, behind the Gears of War 2 manual on a separate piece of paper you’ll find a scratch card with a code that unlocks five maps. Those five favorite multiplayer maps from the original Gears of War have been updated and made available to download and play in Gears of War 2. To download the Flashback Map Pack you’ll first off obviously need an Xbox Live Silver or Gold membership, and be signed in to Xbox Live from the Xbox 360 Dashboard. From there you select Xbox Live Marketplace, then select Redeem Code when prompted, enter your code, and your download will be waiting for you. — On the same scratch card is a claim code that gives you 48 hours of Xbox Live Gold membership, so you can try out the online multiplayer modes in Gears of War 2 for free.

If you buy the Gears of War 2 Limited Edition, it comes with an exclusive Xbox Live code that you can use once to unlock a gold-plated Lancer Assault Rifle for in-game online play. Enter the code the same way you did the (above mentioned) Flashback Map Pack code. After the download is complete, the Golden Lancer becomes available in all multiplayer modes including Horde and Training.

The following video has Epic Games’ Cliff Bleszinski and Rod Fergusson explaining how to best win a chainsaw duel in Gears of War 2.

You can unlock 50 Achievements in the game to get a total of 1,000 Gamerscore points. Here’s the full list of them all…

Big thanks to Mike and the folks at Gamefaqs.