The Legend of Spyro: Dawn of the Dragon behind-the-scenes video 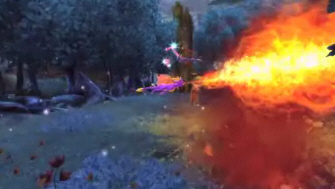 The Legend of Spyro trilogy was a reboot for the classic platform hero who started his career on the Sony PlayStation One way back in September of 1998. The new games have nothing to do with the old ones, making it easier for people who have never played a Spyro game, or who haven’t touched the series in ages, to get back into the fold.

And if you haven’t played a Spyro game, you just may want to try it out after watching these new behind-the-scenes videos. I know for me personally, this series had completely flown under my radar, but this newest game looks mighty impressive.

Not only does it have an all-star voice cast including Elijah Wood, Gary Oldman, Christina Ricci, Blair Underwood, Mark Hamill and Wayne Brady, but the game also features drop-in/drop-out co-op play and, for the first time in the Spyro franchise, the “Free Flight” ability which allows players to freely fly at any time around the game’s beautiful, vast environments (previously Spyro could only fly during certain set-pieces, only being able to glide in any other situation).

The graphics are quite impressive and the game has a true cinematic quality to it, thanks in no small part to the excellent voice cast which seems to fit perfectly with the characters.

It’s interesting cause I have recently been picking up a lot of retro games at Bookman’s Entertainment Exchange (my latest additions being Super Mario Bros. Deluxe [GBC], Fear Effect 2: Retro Helix [PS1] and Resident Evil 2 [GCN) and I always come across the original Spyro and have this desire to pick it up . . . I never do, but I can definitely say this new game has piqued my interest.

Give a look behind-the-scenes in the video, as well as two trailers for the game.