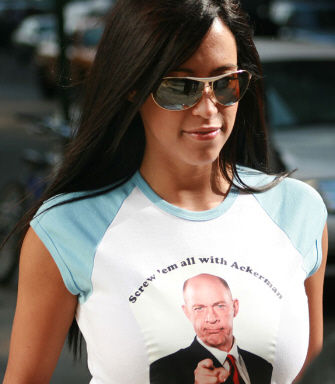 Although famous for a tawrdy endorsement of a certain democratic candidate, in this song Obama girl (Amber Lee Ettinger) aligns her considerable assets and influence behind Howard Ackerman, a jingoistic independent from the Midwest. Ackermans stances include aggressive positions on defense and the utilization of animals for combat, as well as a militaristic approach to the growing threats in the Far East and Soviet Union.

Ackerman on change you can believe in. After all, it’s like he says: “Vote for me, if you want to live.”

Ackerman on Defense: “The best defense is a good offense.”
Ackerman on Foreign Policy: “Do it to them before they do it to us.”
Ackerman on the Economy: “You have to spend money to make money.”