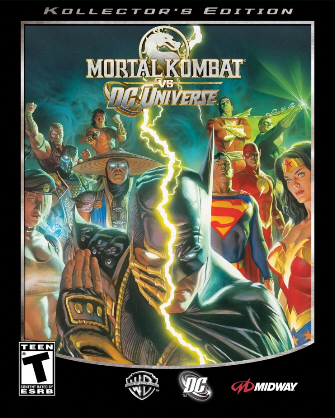 Midway Games is expecting Mortal Kombat vs. DC Universe to be on store shelves and available for purchase on Xbox 360 and PlayStation 3 throughout North America on November 16th, 2008, and Europe on November 21st, 2008. On those days, gamers and comic book fans can enter their favorite retail outlet and purchase the highly-anticipated pairing of some of the iconic characters from the DC Universe, like Batman, Superman, Wonder Woman and The Joker, battling against video game icons Scorpion, Sub-Zero, Liu Kang, Sonya and more.

Midway released the final box art along with details of the North American Kollector’s Edition, which will come in special packaging and feature an exclusive removable print designed by Alex Ross, one of the world’s most pre-eminent and respected comic book artists, as well as bonus video content. That’s if at $69.99 you’re willing to pay $10 more than the regular edition. — In addition, John Tobias, co-creator of the Mortal Kombat franchise, returns to sketch a 16-page comic book to be published by DC Comics that chronicles the shocking, universe-shattering events that lead up to the in-game story mode.