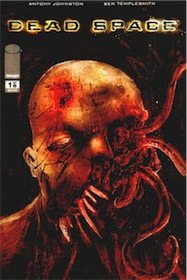 There’s a comic series based on the upcoming original survival horror Dead Space video game. These six animated comics are set in the Dead Space universe, and serve as a prequel story for the Xbox 360, PlayStation 3 and PC game that will be released on October 14th in time for Halloween 2008.

The comic is written and illustrated by Ben Templesmith and written by Antony Johnston. This series tells the gut-wrenching tale of a deep space mining colony that unexpectedly pulls an ancient and vicious alien life force from the dark rock.

Sh*t hits the fan amidst colony-wide panic in the last part.