StarCraft 2 split into three parts – Terran: Wings of Liberty, Zerg: Heart of the Swarm and Protoss: Legacy of the Void 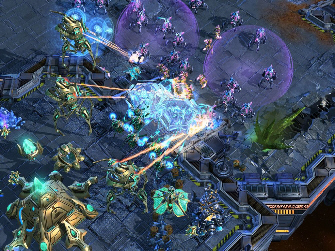 Blizzard dropped a bomb on fans of StarCraft II at BlizzCon 2008. They announced that StarCraft II will be split into three separate games, one for each campaign, and will serve as a sort of trilogy!

The reason behind this split is due to the fact that Blizzard wants to pack each version of the game with as much content as possible and allow for as much customization and player choice as possible, in addition to fleshing out the storyline and world as much as they can. In the original StarCraft, there were 32 missions total: 12 for the Terrans and 10 each for the Zerg and Protoss. Each version of StarCraft II will have over 30 missions, so more than double.

The first game in the trilogy will be StarCraft II Terrans: Wings of Liberty. The second will be StarCraft II Zerg: Heart of the Swarm, with the third and final installment of the main trilogy being StarCraft II Protoss: Legacy of the Void. Additionally, each game will be released at a separate time. The Terran campaign is by far the furthest along, so it will most likely be released first, with the others to follow. Although they may not make release during the same year.

Thankfully, each version will contain a full multiplayer component that allows you to play as all three races, the split is just for the single-player, which you can see in our StarCraft 2 walkthrough.

IGN has much more information on the split in their interview with Rob Pardo, the executive Vice President of Game Design.