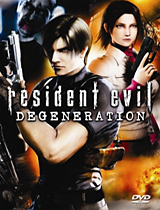 A new trailer has been unleashed on the unsuspecting masses for Resident Evil: Degeneration, the upcoming new computer generated Resident Evil feature film that reunites both Leon S. Kennedy and Claire Redfield!

As you can see from the trailer below, the movie looks very similar to Resident Evil 2, except it reportedly takes place (at least partially) in a zombie-infected airport. But it even has the token little girl, how much you want to bet that it’s Sherry Birkin?