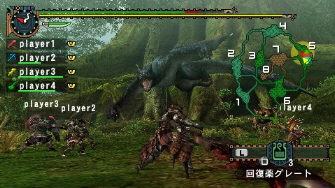 Monster Hunter Freedom Unite is the U.S. & European name for the 2.5 million-selling (in Japan) Monster Hunter Portable 2G, a Capcom series that has absolutely lit the island nation of Japan on fire, ala Pokemon in the past. The game is headed to the U.S. and Europe in Spring of 2009.

The best part of Monster Hunter Freedom Unite is the addition of online play! Sadly though, you will not be able to play online with just a PSP alone. The game only supports ad-hoc multiplayer locally (which allows you to venture with up to four players if you have that many PSP’s and copies of the game), but this is made into an online mode if you have a PS3 (and is the first title to do so, more will be forthcoming).

Using the PlayStation 3, Monster Hunter Freedom Unite will sync up with it and emulate “Infrastructure Mode”, allowing you to go online where you can hook up with three other gamers for some four-player Monster Hunting online action! This is a big step for the franchise outside of Japan, where the game is much more popular and thus it’s easier to find people with copies of the game to play with.

Capcom boasts that Monster Hunter Freedom Unite will give gamers “over 500 hours of gameplay”. It will include previously unreleased monsters, weapons and missions and is set to be the biggest Monster Hunter title so far (I imagine it’s much like the Pokemon games, whose set of Pokemon increased to over 500 with the latest Pokemon Diamond and Pearl and the upcoming Pokemon Platinum).

Here is a Japanese “Monster Montage” trailer for the game.


Specifically, Monster Hunter Freedom Unite will contain over 2,000 armor sets, 1,500 weapons and 400 missions in which you can choose and customize your character. Capcom says players will be rewarded for “strategic gamplay” via the game’s “deep fighting combat sequences and tactics that encourage players to seek out the more experienced Monster Hunters and team up in order to learn from that experience”.

A new feature to this game is the addition of the fully customizable AI Felyne companion, who accompnies players on their quests and gathers resources for them. PSP players can also share their companions with friends through “Felyne Casting” which allows them to transfer data through the PSP’s sleep mode. The game also includes an improved media instal option that allows players to save their game to a Memory Stick for faster loading times. In addition, players who own Monster Hunter Freedom 2 will be able to transfer their save file over from that game to Monster Hunter Freedom Unite.

Here is a cinema scene from the game.