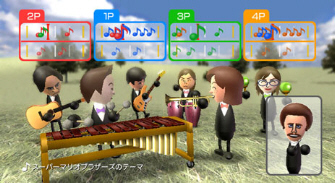 Wii Music has gotten an official release date of October 20th, 2008, in the United States. No date has yet been set for Europe, but it will probably arrive before Christmas.

In case you haven’t heard of Wii Music, it was revealed at E3 2008 during Nintendo’s Pre-E3 Press Conference and it allows literally anyone to jump in and start playing an instrument using the Wii Remote & Nunchuck to mimic gestures they’d make with that actual instrument.

Like shown in this video, where a girl plays the Cello!


The game supports 40 instruments (click the game name above to see a list of which specific instruments are in the game) and includes support for up to four-players so the whole family can get in on the action.

Now that Wii Music has a release date, I’m wondering what else Nintendo has planned for release this year, or if we won’t hear anything new until Christmas? Because Animal Crossing: City Folk is hitting on November 16th. That leaves only Wii Sports Resort (coming in 2009) from Nintendo (Wario Land: Shake It is releasing on September 22nd) and the rest of their line-up is a complete mystery. Hopefully they have a lot of stuff in the works. I guess we’ll see.

Here are some more Wii Music videos showing three other instruments being played with the game:

You can check out the rest of the instrument demonstrations at GameTrailers.