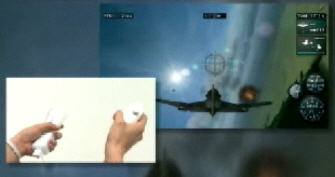 The Sky Crawlers: Innocent Aces is a dog-fighting flight game for the Wii from the same team at Namco that brought us the Ace Combat series. It’s also based on an anime, novel and upcoming movie of the same name.

The game does not yet have a U.S. release date, but it’s looking mighty impressive on the Wii and will hopefully be picked up by an American publisher as it would make an excellent addition to the Wii line-up. Check out two new trailers showing the game in action.