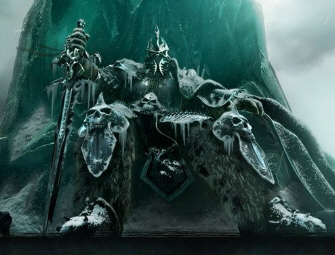 World of Warcraft: Wrath of the Lich King has a final release date of November 13th, 2008 at a price of $40 for the standard edition.

The game is the next expansion pack for the most successful Massively Multiplayer Online Role Playing Game (MMORPG) of all time and the follow-up to the first World of Warcraft (WoW) expansion, The Burning Crusade.

Wrath of the Lich King will be getting a Collector’s Edition as well that will retail for $70. It will include:

* A unique case
* The Art of World of Warcraft: Wrath of the Lich King, a 208-page book featuring never-before-seen images from the game.
* An exclusive in-game pet: Frosty, the baby frost wyrm.
* A behind-the-scenes DVD containing over an hour of developer interviews on all aspects of the game’s creation, the Wrath of the Lich King intro cinematic with director’s commentary, footage of the panel discussion from BlizzCon 2007 and more.
* The official soundtrack CD, containing 21 epic tracks from the game, along with exclusive bonus tracks.
* A mouse pad featuring a map of the newly opened continent of Northrend.
* Two World of Warcraft Trading Card Game March of the Legion(TM) starter decks, along with two exclusive cards available only in the Collector’s Edition.

Man talk about a ton of extras! Even though it’s the same stuff that was include in the Burning Crusade Collector’s Edition, I still almost want to buy it for the artbook and soundtrack CD alone! But what can I say, I’m a sucker for extras.

World of Warcraft: Wrath of the Lich King will launch simultaneously in North America, Europe, Mexico, Argentina, Chile, and Russia on November 13th and a day later in Australia, New Zealand, Singapore, Malaysia, and Thailand. Additionally, it will be available in Korea and the regions of Taiwan, Hong Kong, and Macau on November 18. No date is yet set for mainland China.

“We’re looking forward to launching Wrath of the Lich King and finally giving World of Warcraft players a chance to take on Arthas and his minions,” said Mike Morhaime, CEO and cofounder of Blizzard Entertainment. “Until then, we’ll continue to refine and playtest the expansion content to make sure it provides a highly polished and entertaining experience.”

It should be noted that you are required to have the original WoW and the Burning Crusade expansion in order to play Lich King.