Home » News » PSP News » Prinny: Is It Alright If I’m the Hero? is the new Disgaea PSP side-scroller game

Prinny: Is It Alright If I’m the Hero? is the new Disgaea PSP side-scroller game 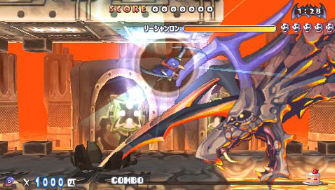 Want a Prinny game?! Well Nippon Ichi has revealed Prinny: Is It Alright If I’m the Hero? An all new Disgaea PSP side-scrolling platformer starring . . . who else? The Prinnies! The game has a Japanese release date of November 20th, 2008 but no release outside of Japan has been revealed at this time.

Prinnies of course are the mascot of sorts from the Disgaea strategy RPG games. And now Nippon Ichi has saw fit to expand on the brand by giving the popular characters their own game! The game is described as an action title and will feature 2D side-scrolling action with the promise of lots of replay value, just as you’d come to expect from Nippon Ichi.

The storyline hints that the game will feature Disgaea cameos other than just Prinny. Etona, Prinny’s master and also a Disgaea character, has sent Prinny off to find the ultimate sweets. Standing in Prinny’s way are some tough demons!

The game will make use of the PSP’s wireless functionality as well as allow players to record their play sessions and send them to friends. In addition, Nippon Ichi plans on offering downloadable maps and bosses!

In Japan the game will also be getting a retailer pre-order bonus for an original soundtrack CD created by Disgaea series composer Tenpei Sato. The CD will include even include vocal tracks.