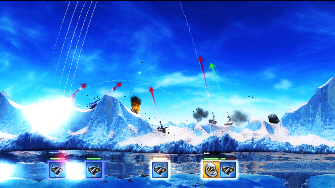 Death Tank has been announced for Xbox Live Arcade by SnowBlind Studios.

And now it’s getting a revival for the Xbox 360 via Xbox Live Arcade by the guy who made the original! Ezra Dreisbach created the original version for Lobotomy Software, and he now works at Snowblind Studios, where they have decided to release an upgraded version for Xbox Live Arcade! So now the game may finally get the recognition it deserves.

Death Tank is fast-paced, requiring quick reflexes and cunning strategy to master. It supports up to four-players locally (on the same Xbox 360) or up to 8 players online! The game is seen from a side-scrolling, 2D zoomed-out perspective as each players little tank battles it out in a largely static, hilly arena.

As you use your devastating weapons and unique items, the landscape will literally change shape before your eyes! Starting out hilly, it’ll be completely flat by the end as the weapons hit the landscape and it reacts! There are 8 different landscapes to play on and the game supports single-player as well as multiplayer for up to 8 tanks simultaneously. You can also play in exciting team battles or chaotic free-for-all! Featuring updated, modern-day crisp graphics and amazing effects, the addictive gameplay of Death Tank will surely make for a visceral experience for anyone willing to give it a shot.

Features of Death Tank are:

• Play on Xbox Live against your friends!
• Customize your tank with powerful upgrades!
• Find secret power-ups to obliterate your enemies!
• Learn new strategies and hone your skills!
• Claim your spot on the leaderboards TODAY!