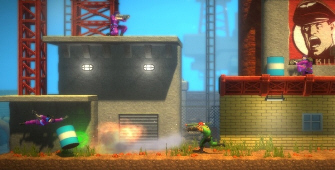 But Rearmed is far more than just a remake – it features all-new modes such as the 2-player co-op play, smarter enemy AI, new bionic arm abilities, new weapons, bigger bosses, online rankings, a frenetic multiplayer mode for up to four players, and a series of over 50 devious challenge rooms to test your swinging skills. Faithfully sticking to the original story, Bionic Commando Rearmed tells the story of Nathan “R.A.D.” Spencer’s first mission, sent in to retrieve captured agent Super Joe from the hands of the Imperials. Fans of the original story can expect to see all the characters from the NES version, as well as the memorable moments that made the title so popular with fans.

Does the series swing back into the spotlight? Find out in this Bionic Commando Rearmed video review.


To quote the video review: “At $10, Bionic Commando Rearmed is a steal. It’s one of those games that feels organic to play. There are certainly some hangovers from the age the game was originally released in, but its stylized production values and challenging gameplay will get you hooked. It would’ve been great to play co-op online with friends but there’s so much content for the money that we’re not about to complain.”