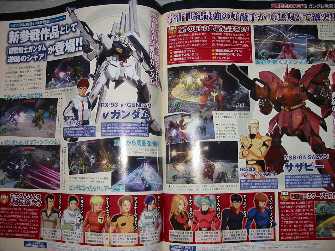 Dynasty Warriors Gundam 2 has been announced for American release in 2009! The game will be coming to the Xbox 360, PS3 and PS2 and will once again be a collaboration between Koei and Namco Bandai.

The game tells of a future in which rebel space colonies launch a brutal war of independence with a series of coordinated orbital strikes against Earth. The chaotic assault signals the dawn of a new age of combat and the ultimate instrument of warfare is born, the Mobile Suit.

Dynasty Warriors: Gundam 2 combines the rich legacy of Gundam with the devastating power of the Mobile Suit for some furious Tactical Action gameplay that you’d come to expect from the Dynasty Warriors brand. And like the first game players will be thrust in some incredible battles against legions of enemy Mobile Suits on distant planetary surfaces in the far reaches of outer space.

Like most Koei “sequels”, the game doesn’t change much, especially to the core gameplay. As you still control a single robot and lay waste to hundreds of enemies as you occupy strategic points on a map and face bosses. But what they have added, as always, is tons of additions to everything else, not the least of which is new special attacks and moves.

The missions in the game are based off plotlines from past Gundam anime, including giving players the chance to experience Mobile Suit Gundam: Char’s Counterattack. A 1998 animated film that many fans still consider to be the pinnacle of the entire Gundam series. Which has Amuro Ray’s RX-93 Nu Gundam (which is fully outfitted with missile-spewing fin funnels) facing off with Char Aznable in his custom-built red MSN-04 Sazabi.

And there are other additions to the story mode besides Char’s Counterattack, including early hints that the Strike Freedom from Gundam SEED and SEED Destiny will be playable. And for the first time in the Dynasty Warriors series, you will get to fight some formidable (that is, huge in size) bosses in the form of Mobile Armors, including the MA-08 Big Zam from the original Mobile Suit Gundam, the NZ-333 Alpha Azieru from Char’s Counterattack and the MRX-009 Psycho Gundam from Mobile Suit Zeta Gundam. All of them appear huge on-screen, just as you’d want. The Psycho Gundam in particular is very impressive as it can configure it’s body into a titanic mobile fortress that can move at remarkable speeds.

Dynasty Warriors: Gundam 2 will also include new stories featuring mecha from the latest Gundam anime, plus mecha from Char’s Counter Attack and more. With mecha parts collected throughout the course of the game, players will be able to adapt a Mobile Suit which can be piloted into combat.

In addition, Dynasty Warriors Gundam 2 will include versus online play! The game has a Japanese release date of December 4th, 2008.

“Last year NAMCO BANDAI Games and KOEI combined forces to create DYNASTY WARRIORS: GUNDAM. The result became one of the fastest-selling PLAYSTATION 3 system games in Japan, and to date the game has sold over 800,000 units across multiple platforms worldwide,” said Amos Ip, Senior Vice President for KOEI Corporation. “Our companies have come together once again, and we are excited about reuniting two very powerful cultural icons for another monumental gaming experience.”

Here is the full list of Mobile Suits in the game: