Home » News » Wii News » Is Nintendo publishing the shooter The Conduit on Wii?

Is Nintendo publishing the shooter The Conduit on Wii? 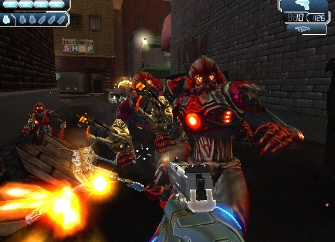 It has been announced that The Conduit will be at PAX 08. But the most interesting aspect of that announcement is what company is displaying it . . . Nintendo.

The Conduit is a first-person shooter built specifically for the Wii that garnered a lot of attention and praise when it was shown at E3 2008. In the game the player has fierce battles with alien invaders in a highly detailed (for the Wii anyway) 3D world using a unique, dynamic control scheme only possible on the Wii.

I must say that I hope Nintendo does publish this game, as long as they really push and market it. They really need a good shooter, and something like this could really help the Wii in the eyes of hardcore gamers if it turns out to be a good game. It looks like it’s moving in that direction, so lets hope so.

Here is a video from the recent Games Convention in Germany showing off the gameplay.


Eric Nofsinger, Chief Creative Officer at HVS, had this to say about the news, “PAX is jam-packed wall-to-wall with passionate game fans. We are incredibly honored to be featured there at Nintendo’s booth. It’s a fantastic opportunity for us to receive input and feedback directly from other gamers.”

Kerry Ganofsky, founder and C.E.O. of HVS, the game’s developer, commented on the attention, “We are honored and overjoyed to have our efforts recognized. To be acknowledged by the industry news media shows that the hard work of our team has not gone unnoticed and only strengthens our resolve to continue to push our game play, graphics, and the technical boundaries of the hardware’s capabilities.”

Here is a video from PAX 2008 showing off the gameplay options and play.