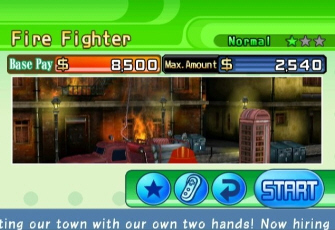 Hudson has announced a new Hard Working People game for Wii that it is bringing to America from Japan that is developed by Konami but published in America by Hudson Soft.

In Hard Working People (Working Title) people must . . . what else? Work hard to save the planet! That’s because a meteor is on a crash course with Earth. But never fear! The humans can work to purchase the items they need to prevent the life-ending catastrophe. There’s only one problem though. Said items are extremely expensive!

So players are given a timeframe in which they must go through 50 professions as they attempt to raise the money needed to save the earth, with successful workers being rewarded with huge cash bonuses (naturally). These play out like a series of mini-games as the gameplay for each job differs from the last.

On their way to saving the Earth, players can collect up to 150 different interactive characters who will work alongside, as well as against, the player. Players can also strive to achieve “Master” status by completing the game’s most advanced level.

In addition to the single-player Story Mode, there will be a Battle Mode available in which two people can work to outdo each other in their chosen professions. There is also a “Seminar” Training Mode for newbies and a Gallery that will display the career achievements as you make them.