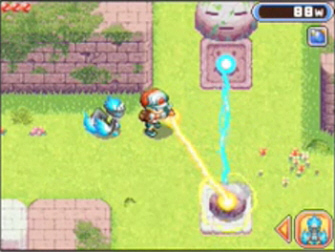 Elebits: The Adventures of Kai and Zero is an all-new entry in the Elebits series developed by Hudson and published by Konami for the DS with a planned release date of November 18th this year.

Unlike the Nintendo Wii game, this new one goes in an entirely different direction with some surprisingly good looking results. The game plays out more like an action adventure/platformer and is viewed from an isometric perspective. You use the powers of the Elebits to effect objects in the environment since they double as energy sources in a plot that involves a far-off world where energy sources have been depleted.

Players need to seek out the mischievous Omega Elebits who hold magical powers. Along the way they will take on many quests and solve puzzles by interacting with the environment using the Elebits they find. Each Elebit has unique abilities, allowing players to reveal hidden paths, freeze flowing water, turn darkness to light, levitate rocks and much more.

In addition to the single-player campaign, the game will also support Nintendo Wi-Fi Connection for online head-to-head battles for up to four players!

Check out the first footage of the game in this fun-looking trailer.