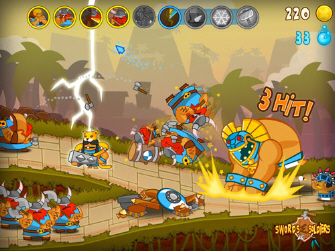 Swords & Soldiers is an all-new WiiWare game from the original developer of de Blob (the PC version), who have formed their own company called Ronimo Games in Utrecht, The Netherlands.

Along with the announcement for their new company was the first information on their all new WiiWare game. Entitled Swords & Soldiers, the game is a side-scrolling RTS with a very cool art-style that is really reminiscent of the just-released Xbox Live Arcade game Castle Crashers.

In the game, there are three distinct factions that battle for the power of the gods. It will feature a single-player campaign and a competitive splitscreen multiplayer feature with various modes you can play. The game is scheduled for release in America, Europe and Australia in the fourth quarter of this year.

The studio gained high accolades for the creation of the original de Blob game that became so popular on the internet that publisher THQ bought the IP and will be releasing their own version of de Blob for the Wii on September 26th.

Speaking about de Blob, Fabian Akker, one of the co-founders said: “de Blob was the eye opener for us, that we can make cool games and function as a good team. The game definitely gave us the opportunity to start our own company”.

Ronimo Games is founded by seven developers in Utrecht, the Netherlands. They had this to say about their new game, Swords & Soldiers, “We always dreamed of designing an RTS and when WiiWare came out we immediately figured that this was our chance.”